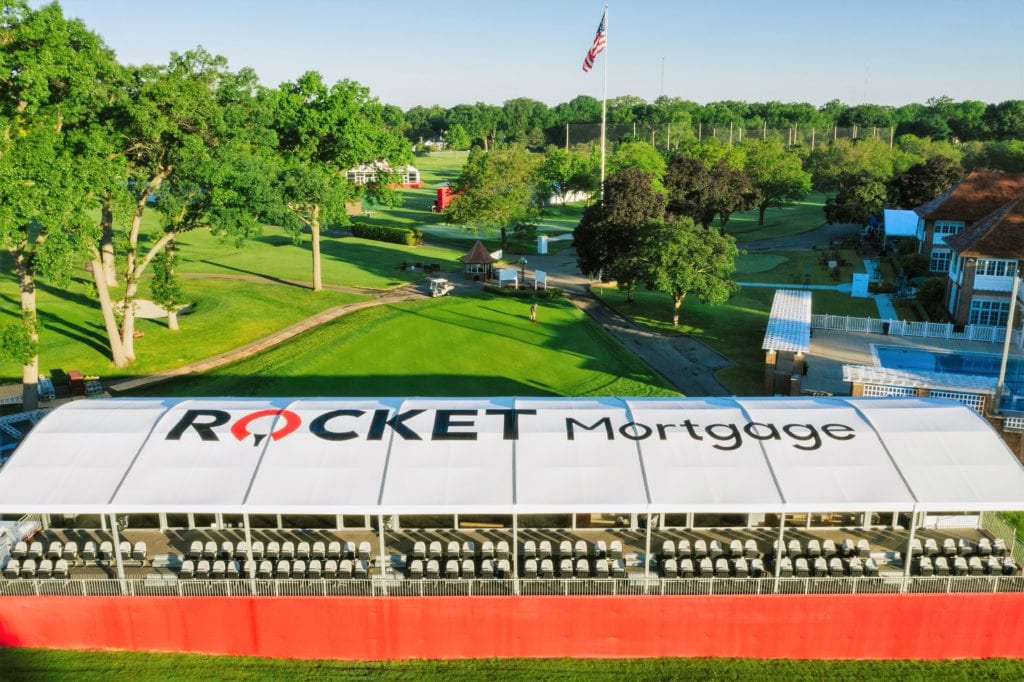 In terms of economic impact and rave reviews the first Rocket Mortgage Classic and return of the PGA Tour to Michigan in 2019 was birdies across the board.

Tune in on television now to catch Rocket Mortgage Classic II. The COVID-19 pandemic has rendered the tournament being played out on television without fans.

It’s a major shame because the fans so readily embraced it a year ago and sold the place out.

In January, Jason Langwell, tournament executive director and executive vice-president of Intersport, said the plan was to make it even bigger and better.

That’s still the plan folks, but with this one year survive the pandemic version to fight through.

You can help it survive, by the way. Turn on your television. Watch. Give it a ratings boost. Social media about it. Let the sponsors who have stuck with it – especially Rocket Mortgage – know you appreciate at PGA Tour event being in Michigan.

Langwell loved the 2019 version, and 2021 when fans can return, should be gangbusters.

“I think it was amazing,” he said of the inaugural event that has three years remaining on an original contract. “There was about a 10 years or so absence of the PGA Tour in Michigan, and then to have it for the first time in the city limits, it had a huge impact and served as a huge source of pride for those who live here and  work here, and also for the entire staff, the volunteers, Detroit Golf Club and the title sponsor, which has been a great supporter of Detroit as we all know.

“It was an amazing special event. Everyone involved can be proud that the Rocket Mortgage Classic showed the world Detroit is a great place to live, work and play.”

The $7.3 million tour event, won by 36-year-old first-time winner Nate Lashley, sold out on the weekend and hospitality sold out its product line as well.

“With the tour not having been in Michigan for a while there was pent-up demand for the tournament, but the impact locally was incremental with downtown restaurants and shops, rental cars, guests in hotels downtown, and impact from out ancillary events and with the engagement of our marketing partners,” he said. “There was a big halo effect about it including the incredible response from the community and fans. What we found through having the great golf course, the work force engaged, the community clean-up days, our volunteer force, the Palmer Park community engaged, the activations downtown, in all those kinds of things we found a demand to make this more than just a great golf tournament.”

The original plan and schedule for this year had the 2020 Rocket Mortgage Classic set for May 26-31 on the same weekend as the Detroit Grand Prix on Belle Isle and falling in the weeks between two major championships – the PGA Championship (May 14-17 in San Francisco) and the U.S. Open (June 18-21 in New York).

That was shuttled obviously. Things got moved. Fans are asked to stay home for safety. And well, you know the issues.

The Rocket Mortgage Classic and the Detroit Grand Prix at the same time would have had the town and state rocking. Imagine a weekend hitting those two events and maybe a Detroit Tigers game to boot.

It would be great for the fans, but there is a subtle value here, too. Langwell said title sponsor Quicken Loans made the tournament focus a community focus.

“They wanted to build a bonfire of excitement and events throughout the city, like a campfire that draws people to the city and all the other activities that spread out from there,” he said. “We had this great base to build from at Detroit Golf Club and went from there. It’s not just four days of great golf. It’s the Detroit experience. That was really the way we looked at it, and why we wanted to have the fans truly feel they were in Detroit.”

Figure it as the plan for 2021. Right now, turn on your television and watch some golf.