THERE’S A BEAR IN THE WOODS 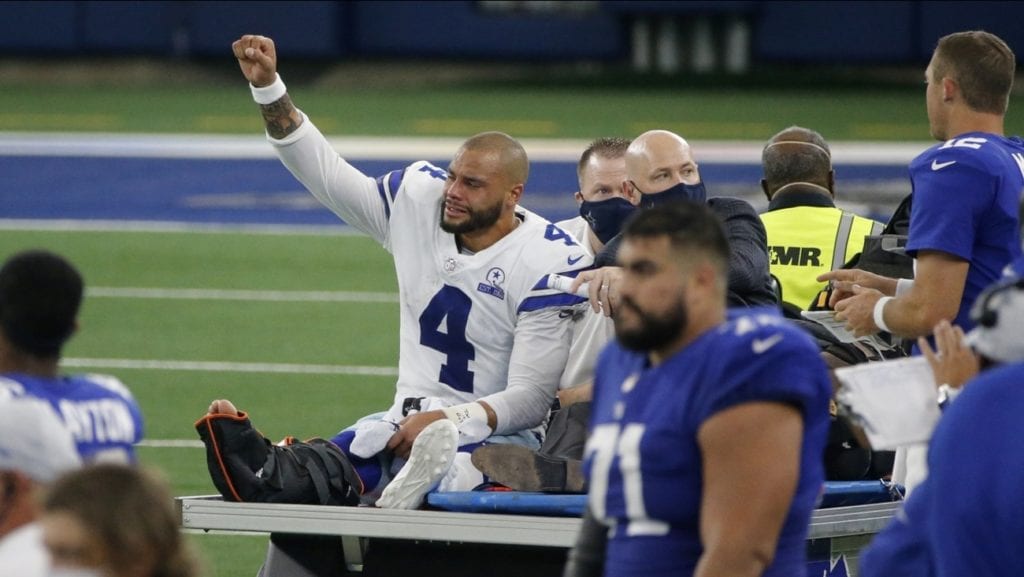 Sometimes you get the bear; sometimes he gets you.

Did you see the Dak Prescott injury?

The bear got him. That’s what happens when you go into the woods often enough.

I did not see it.  I heard about it but refused to look.

I happened to be on Facetime with my 2-year old grandson when there came a commotion in the background.  His daddy was watching football and was making quite a fuss about the Prescott injury.  He wanted to know if we had seen it.

I had no interest in watching a replay of the carnage, but others in my household quickly turned the game on. Later, they also searched it on the internet and, of course, it had immediately gone viral for all to consume.

I did not consume it. Nor will I. At least not intentionally.

In fact, I always turn away like a kid watching a horror movie when an ugly injury is replayed, no matter the sport.

Maybe it’s because I’ve been there. When you’ve had those kinds of things happen to you, you become a bit more sensitive to them.

THE AGONY OF DEFEAT

There are plenty of examples of terrible injuries we have all seen many times over the years.  They have been seared into the nation’s conscience.

How about the ski-jumper on ABC’s Wide World of Sports? Who doesn’t remember “The agony of defeat” guy tumbling off the jump platform?

We recall Cincinnati Bengal Nose Tackle, Timmy Krumrie’s moment of truth in the Super Bowl XXIII loss to Joe Montana’s San Francisco 49ers.  His leg snapped like a whipsaw for the world to see.

IT COULD HAPPEN TO YOU

My personal tragedy of a career-ending injury was a little more private, although it did happen in front of 60,000-plus fans at Cincinnati’s Riverfront Stadium and a regional television audience at home.

However, near as I could tell nobody really noticed other than friends and family and perhaps a few die-hard Bengal fans.

We were playing the Raiders and Marcus Allen ran what we called an “over-draw” to the tight end side.  The Raider tight end, Ethan Horton, came down and hurled his 260 lbs. at my legs just as I was launching myself toward Allen. The force of his block pinned my foot to the ground and my leg against a pile of bodies in front of me.

I had already commenced lift-off so the rest of my body flew toward Allen, but my left leg stayed anchored in the pile. I screamed in pain as Allen ran into my limp body and fell over me. Ends up I tore three ligaments, ruptured the capsule and had extensive cartilage damage. However, I did make the tackle on the play – for what it’s worth.

The pain was immediate and as intense as I have experienced. It felt like I got shot in the knee.  I knew immediately it was not good.

Our astute team doctor confirmed matters after putting the joint through its paces.

“Well?” I asked through gritted teeth.

“FUBAR.” He said with a smile.

I thought I knew my anatomy fairly well, but I had never heard of this so-called fubar before.  Was it some kind of ligament? A cartilage? Bone?

I took the bait.

“What the hell is fubar?” I asked

His smile got bigger.

“Fouled Up Beyond All Recognition.”  But he didn’t say “fouled.”

THE LONELIEST RIDE OF MY LIFE

So that was it:  The last play of my career after 10 good years of dodging bullets and fooling them all.

However, I did go out with a modicum of pride, although not on my own terms.

The good doctor called for a cart to remove my damaged carcass from the field of play.

I told him you can bring a cart out here but no way in hell am I getting on that fouling thing. I didn’t say “fouling” either.

A couple of my boys came to my aid and I threw an arm around each of their shoulders. They slowly limped me off the field, tears streaming down my face.

I knew it was over right then and there. The last play of my surprising career.

Once on the sideline they lifted me onto the fouling cart, and I took the loneliest ride of my life through the bowels of Riverfront Stadium to the x-ray room.

No more going into the woods. It was time to start my real life’s work.