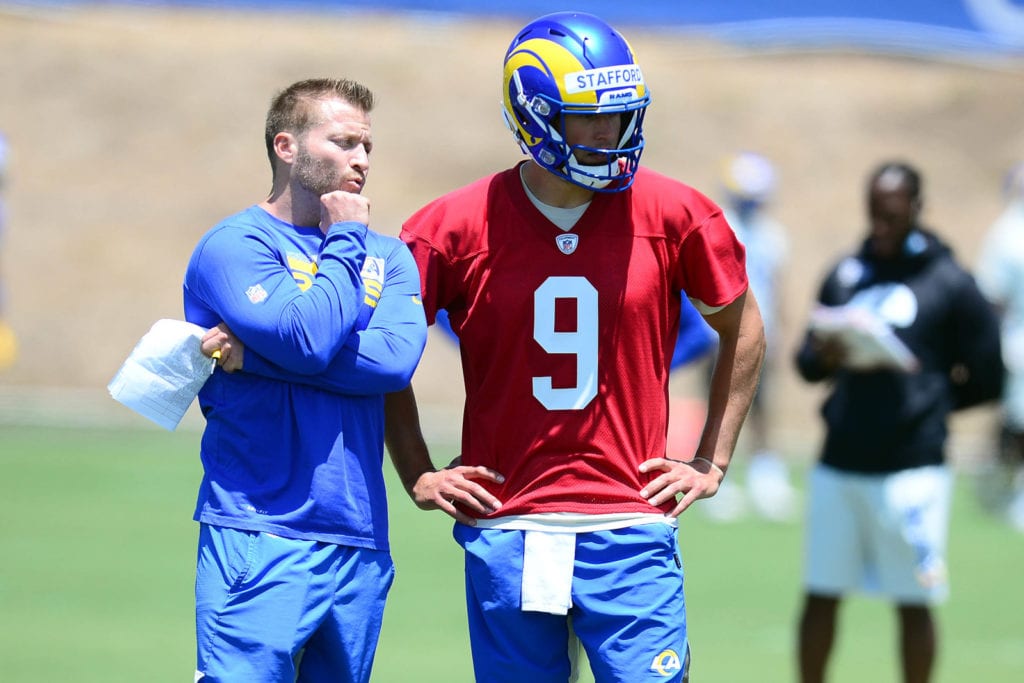 As NFL football training camps loom, HUGE went all in on the new Detroit Lions quarterback, Jared Goff, versus the old, Matt Stafford.

Huge said: “Goff will win more games in Detroit this year than Stafford will with the Rams.”

Huge, a.k.a. Bill Simonson, has been making his huge predictions for 27 years in radio and of course can be heard on the MSN Network from 3 p.m. to 6 p.m. as part of your regular day.

Bill posted it on social media, of course, and repeated it, too.

A lot of people noticed. It stirred the opinion pot and even Sports Illustrated got involved through its website:

What prompted the talk was an ESPN poll of 50 coaches, league scouts and executives that had Stafford listed as the sixth best quarterback in the NFL now that he is with the Rams.

In addition, the NFL Network’s “Good Morning Football” analyst Peter Schrager said he would not be surprised in any way if Stafford was included in the conversation this season to be the league’s MVP.

“My doubt in Stafford lies in big game/playoff wins in Detroit,” Huge said. “For all that say he is great and did it alone in without anyone around him I differ on that. There were years where he had players on both sides of the ball good enough to win more big games, the NFC North, and even home playoff games in Detroit. It was time for a change. Lions are in a better place today without Matt Stafford. That’s all you need to focus on.”

Of course people had their own ideas about Stafford and focus, as well over 200 comments came swiftly on the posts.

Mike Selby wrote: “As an organization, they took HUGE steps backwards when he wanted to leave and we signed Goff. Hoping we draft a QB next year.”

Rich Johnson wrote: “Crappy running game, lousy defense and porous offensive line. Stafford was NOT the problem. It’s pretty tough to hit even great receivers when you are running for your life. Tom Brady, Payton Manning, Joe Montana, etc. wouldn’t have done any better in Detroit!”

Michael Brooks chimed in: “Such a flimsy opinion and completely misguided. He honestly thinks Goff will win more with the Lions roster than Stafford with the Rams roster. Ridiculous.”

Brett Hosmer has this take: “Watch Stafford lead the Rams to the Super Bowl and win it. Everyone (including me) will be like, ‘Why couldn’t he have done that in Detroit?’ That would be the most Lion-esque thing ever. Just twist the knife even deeper in the hearts of all of us endlessly suffering Lions fans.”

Daniel Rogers said this: “Wow. Completely lost in this one Huge. Can’t wait for the crow dinner. Without Stafford we would have never even seen the playoffs. Name one elite player he had around him on Offense other than Calvin who he had to throw to every time, even in triple coverage because he literally had no one else. The ownership has done this my entire life… they have a few good players, now and then, and they fail to out anyone around them. They are the laughing stock of the NFL!”

My take: I suspect the change of scenery for both quarterbacks will be beneficial. They will both play well. The Rams, though, have a better overall roster. The QB is the most important player, but it remains a team game.

WHAT IS YOUR HUGE OPINION?

Once again a HUGE opinion started a huge debate.

And we love debate. What do you think? Will Stafford be an MVP candidate with the Rams? Is he the sixth best QB? Will the Lions win more with Goff than the Rams with Stafford?

Give your Huge opinion: hugeshow@michigansportsnetwork.com

PrevPreviousHUGE OPINION: NOT A GOOD VIBE ON THE FUTURE OF COLLEGE SPORTS
NextBELLINO: PISTONS A PLAYOFF CONTENDERNext