IS THIS THE YEAR MSU FOOTBALL WINS B10 AND NATIONAL CHAMPIONSHIP? 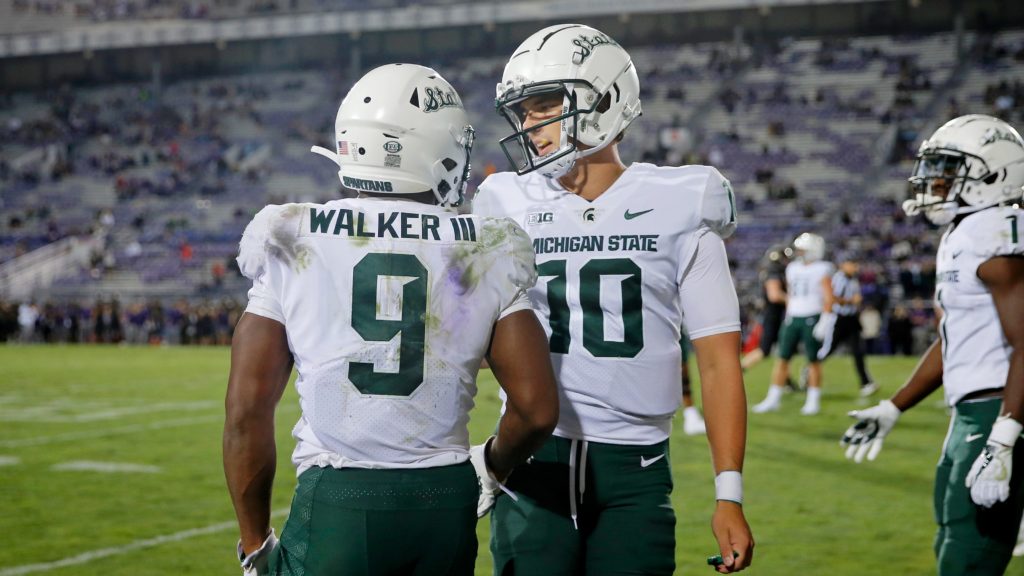 When Michigan State football coach Mel Tucker and a select number of players traveled to Indianapolis for Big Ten Media Days back in July, Spartan Nation’s expectations for their team likely entailed contention for a bowl game and nothing more.

The Spartans were unranked, looking to improve upon a 2-5 record from the season prior. Fast forward to today, and MSU is a perfect 8-0 after a win over No. 6 Michigan.

On Tuesday night, the Spartans were picked at No. 3 for the first College Football Playoff rankings of the season. It’s safe to say MSU has been the biggest surprise in FBS college football so far this season.

So now, the question that nobody had predicted they would be asking back in July is beginning to present itself; Will MSU win the Big Ten? As if that standard isn’t high enough as it is, is it reasonable to see the Spartans playing at Lucas Oil Stadium for a second consecutive month for a chance to claim a national title as well?

Of course, there’s still a long road ahead for Tucker and company, and it starts as soon as this Saturday in West Lafayette, Indiana. Purdue has a history of upsetting top-ranked opponents, and it did so as recently as Oct. 16 when it defeated No. 2 Iowa on the road.

From there, MSU will return home to face Maryland, who is in a current battle for bowl eligibility.

It will then be the final two weeks of the regular season that will determine what the postseason holds for the Spartans, assuming they take care of business against the Boilermakers and Terrapins.

It’s not really in question that the victors of the Big Ten should come out of the East. And for MSU, its toughest opponent is still the same one it’s been since before the season began: Big Ten juggernaut Ohio State.

Many would argue the Buckeyes should be ranked ahead of the Spartans right now, and they’re probably right. As great as MSU has looked this season, it’s still safe to believe that there’s still a significant gap between OSU and the rest of the conference. That is why if the Spartans were to go down to Columbus with a 10-0 record and pull off the upset, not only would the Big Ten title almost certainly be theirs, but a spot in the CFP would be guaranteed if they were to go on and finish the job against Penn State.

While a number of Big Ten teams have made an appearance in the AP top-10 rankings this season, there’s still a stigma in the college football world that diminishes the conference’s credibility when compared to other Power Five conferences like the SEC.

But OSU has represented the Big Ten in recent years as a top-tier opponent, and teams like Alabama and Georgia have every right to take the Buckeyes seriously. That is why, for MSU’s sake, everything comes down to where OSU stands after Nov. 27. For a Big Ten title to be a guarantee and a ticket to its first CFP appearance since the 2015-16 season, though, MSU would likely need to continue on its current path and win out.