WHY MSU RALLIED TO BEAT MICHIGAN 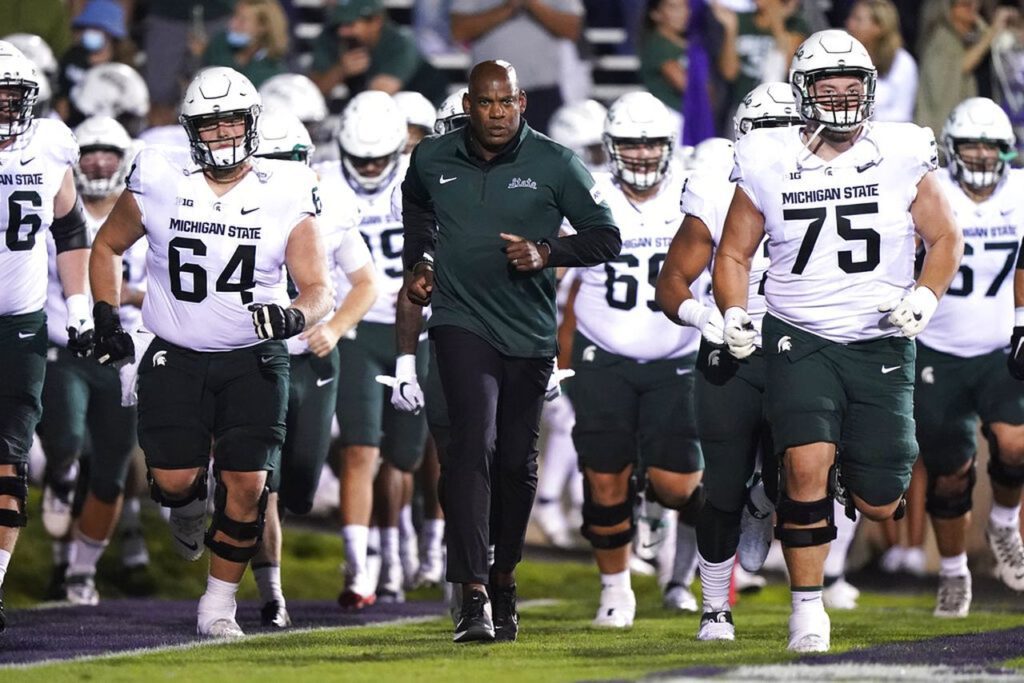 For the second-straight year, Michigan State came out on top late in the game against in-state rival Michigan. Those who watched the contest in its entirety, though, would know the 37-33 final score didn’t nearly reflect the summary of the matchup. And had you tuned in a little over an hour prior to the final outcome, you would have been considered foolishly optimistic to predict such a result.

It was late in the third quarter when Spartan quarterback Payton Thorne and the rest of the MSU offense set up at the line of scrimmage facing third down with four yards to go on Michigan’s 29-yard line. Instead of going to the all-reliable Kenneth Walker III for the short run, Walker took off wide to the left for a pass. He was met at the line of scrimmage by Michigan’s Aidan Hutchinson and Josh Ross, and the no-gain resulted in a fourth down.

It was at this moment when Spartan offensive coordinator Jay Johnson’s play-calling was valued most. MSU chose against settling for the field goal, seeking to get more out of its marching drive.

On what was one of the most critical plays of the game, rather than looking short, Thorne’s focus was set deep on the right side of the field. He let it fly, and as he’s done since middle school, connected with receiver Jayden Reed, who was downed at just the 1-yard line. Hope had been ignited for the Spartan faithful.

The drive was finished off by a touchdown rush from Walker, who tallied his third for the day. But the Spartan offense wasn’t ready to leave the field yet. MSU wanted the 2-point conversion to make it a one-possession game, and that’s just what it did.

Thorne dropped back and threw it over the middle to find receiver Tre Mosley in the back of the end zone. The score was 30-22. This was now very much a game.

The Wolverines would do anything in their power to keep the Spartans off their doorstep. Right away, Michigan responded with four-straight plays for positive yardage, gaining 27 yards as it approached midfield. Wolverine running back Hassan Haskins had been the go-to on the last leg of that sequence, but Michigan chose to go back to its other backfield threat, Blake Corum.

As he’s done all season, MSU safety Xavier Henderson embraced the moment, stopping Corum behind the line for a loss of two yards. Michigan QB Cade McNamara was prepared to pass on second down with 12 yards to go, but found tight end Erick All for what was only a gain of three yards. The Wolverines would start the fourth quarter faced with a third-down situation with nine yards to go for a fresh set of downs.

There surely was a sense of uneasiness among Spartan fans between the third and fourth quarters. Michigan had converted on seven third downs prior to this point, and one more at the start of the fourth would put them in enemy territory with a fresh set of downs.

The ball was snapped, and Spartan cornerback Justin White immediately blitzed with his eyes set directly on McNamara in the backfield. The QB was forced to respond quickly to the pressure and threw the ball incomplete toward the left sideline. Michigan would have to give the ball back to the Spartans.

MSU found itself in another tough situation to start the drive, facing third-and-10 after two incompletions. But it was Reed who acted as the savior once again, completing an 11-yard completion to earn the Spartans the first down.

Not long after, another third-down situation was staring MSU in the face. With four yards to go, Thorne completed the pass to tight end Connor Heyward, and the Spartans had life yet again.

As if the game was designed to finish in the most suspenseful way possible, MSU would have to convert on another third down for the third time that drive. This time, it would be well worth the wait.

Walker took the handoff, hit the open gap on the right side of the line and took off for a 58-yard TD run, his fourth of the top-10 matchup.

The battle back was still not over, though, as the Spartans were down two points.

In case you’re not the most frequent follower of the game of football, keep in mind that 2-point conversions are far from a guarantee. Getting two in a single game, for that matter, is very unlikely to happen. But MSU did it.

The point is: MSU needed nearly everything to go in its favor for it to rally back in this game.

The Spartans’ momentum would finally come to a halt, as Michigan had more to say before the whispers of an upset could grow louder. Faced with third-and-eight, McNamara launched the ball deep down the right side of the field finding Mike Sainristil for a 43-yard completion.

The Wolverines would march down into the red zone, but the Spartan defense was resilient, holding Michigan to a field goal from the 18-yard line. Michigan regained the lead, 33-30.

Wolverine coach Jim Harbaugh was given another chance to capitalize on the Spartans’ failures, as Michigan received the ball back after forcing MSU to punt.

In another one of the game’s most pivotal moments, Michigan QB J.J. McCarthy fumbled the ball, turning it back over to the Spartans, who would start their offensive drive on Michigan’s 41-yard line.

MSU took advantage this time, as Walker scored his fifth and final TD of the afternoon to complete a six play drive.

The Wolverines would have another opportunity to make something happen, but the Spartan defense came up big again, ultimately stopping Michigan on downs after what was nearly a three-and-a-half minute drive.

To MSU’s dismay, Michigan had yet another chance after the Spartans were forced to punt with just over a minute remaining. With a first down and 10 yards to go on the Michigan 48-yard line, McNamara looked to connect with tight end Luke Schoonmaker, but he was picked off by Spartan freshman cornerback Charles Brantley.

That would be the dagger.

Preparation and persistence down the stretch made the ultimate difference for MSU in this contest. It wasn’t by chance that everything went right for the Spartans when they needed it to. Fate was in their own hands with 6:47 left in the third quarter, and they successfully executed.

PrevPreviousIS THIS THE YEAR MSU FOOTBALL WINS B10 AND NATIONAL CHAMPIONSHIP?
NextWHY MSU SHOULDN’T BE RANKED BEHIND MICHIGAN IN LATEST CFB PLAYOFF RANKINGSNext