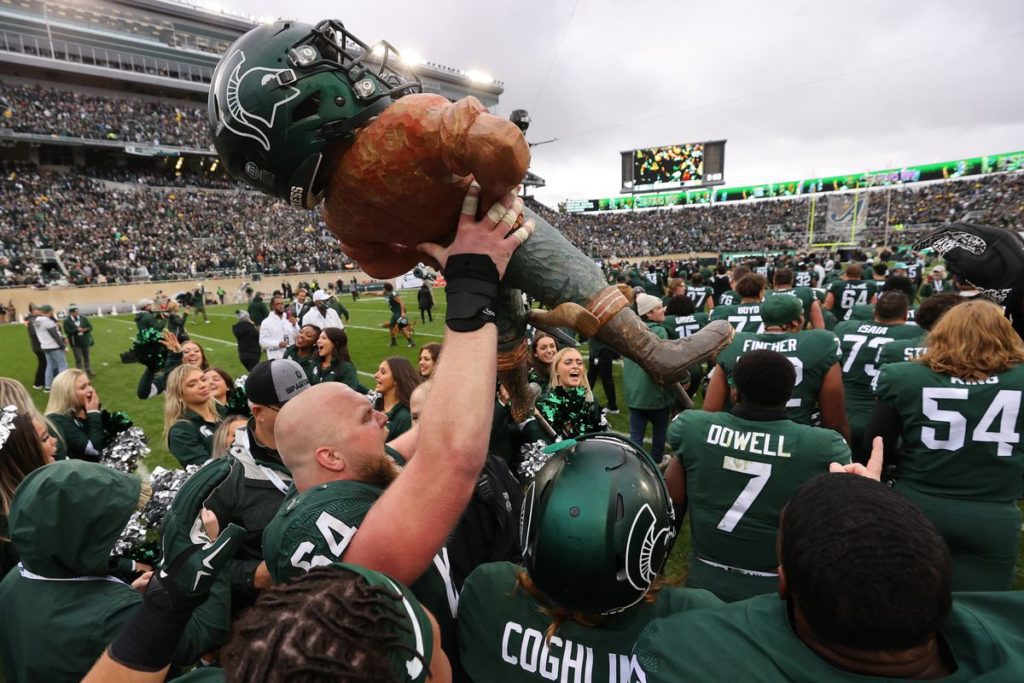 It’s early November, and that means it’s the time of the year when the guessing game of who’s in/who’s out pervades the college football world. It’s thrilling, agonizing and taxing all at once, but fans wouldn’t have it any other way. Unless perhaps, you’re a Michigan State fan.

Less than two weeks ago, the Spartan faithful would have thought the world was their oyster, having conquered No. 6 Michigan and heading into Week 10 with a perfect 8-0 record and an early spot in the first college football playoff rankings. Oh, how much can change in the matter of a week.

On Tuesday night, the second CFP rankings were released, and to Michigan State fans’ dismay, Michigan was placed in front of the Spartans at No. 6, while MSU was voted seventh.

Of course, with the consideration that each team’s schedule from here on out could very well not go in their favor, this ranking ultimately means little to nothing. Even so, it’s a slap in the face to a program that defied the odds and came back from a 16-point deficit to beat its rival in a top-10 matchup in the biggest sporting event of Halloween Weekend.

Here’s why the committee was wrong in its selections:

The Spartans come off their first loss of the season in what was an impressive win by unranked Purdue. The “Spoilermakers” did what many had anticipated, and that was knock off yet another top-10 team. But that’s just the thing; MSU was projected to be upset before the team even boarded for West Lafayette.

Credit absolutely has to be given to the Boilermakers. They capitalized on all of MSU’s biggest weaknesses and didn’t allow the Spartans to find a way to win as they’ve done countless times this season. It was bound to happen eventually, and Purdue was just the team to do it.

While the Boilermakers are 6-3, they are a much better team than their losses suggest. Frankly, Purdue should be ranked going into this weekend, The team received the most honorable mention votes for this week’s AP Top 25 Poll with 174. If it wasn’t for its inexplicable losses, Purdue would be right there in the rankings with fellow Big Ten members like Wisconsin, Iowa and Penn State.

The committee’s logic contradicts itself

We’ll get into the most compelling and obvious reason of all in that MSU beat Michigan in the head-to-head matchup, but here’s the counterargument for any case the CFP committee could make for its decision. Oregon beat Ohio State, and rightfully so, is ranked ahead of the Buckeyes in the CFP rankings.

Not only did Oregon hand Ohio State its lone loss in a top-15 matchup of its own, but the Ducks did so as early as Week 2 of the season. That’s nine weeks worth of time for an argument to be made that the Buckeyes have improved from the team they were in just their second game of the season. The Spartans’ contest with Michigan occurred not even two weeks ago.

As if that’s not enough reason to question the committee’s selections this week, compare MSU and Oregon’s records. The Ducks have had a tremendous season, there’s no doubt about it. But Ohio State was their only victory over a ranked team, whereas MSU had defeated two. Also, Oregon’s single loss was to Stanford, and though it required an overtime thriller, the Cardinals are well outside the AP Top 25. There’s hardly any way you can spin this logic.

The committee generally agrees that Michigan is the better team. Obviously, when deciding the the college football playoff, this is ultimately what it comes down to. But there’s simply not enough evidence to prove it.

Most would agree there’s not much debating that at this point in the season, the sixth and seventh spots belong to the in-state rivals. So naturally, it’s a matter of which team gets which spot. Please tell me if I’m wrong, but wouldn’t the best piece of evidence to decipher this argument be the game that these two teams played as recently as Oct. 30?

In past years, the only head-to-head matchups between teams in the battle for a CFP spot were usually limited to the SEC. So it’s understandable to be conflicted when deciding from a pool of teams that haven’t had the opportunity to face off yet. But in this case, everything you need to know is right there in front of you.

It’s a matter of one single spot. In any universe, the edge should go to the team that won the head-to-head contest. It’s just that simple.

PrevPreviousWHY MSU RALLIED TO BEAT MICHIGAN
NextWHY NO. 7 MSU WILL BEAT NO. 4 OSUNext