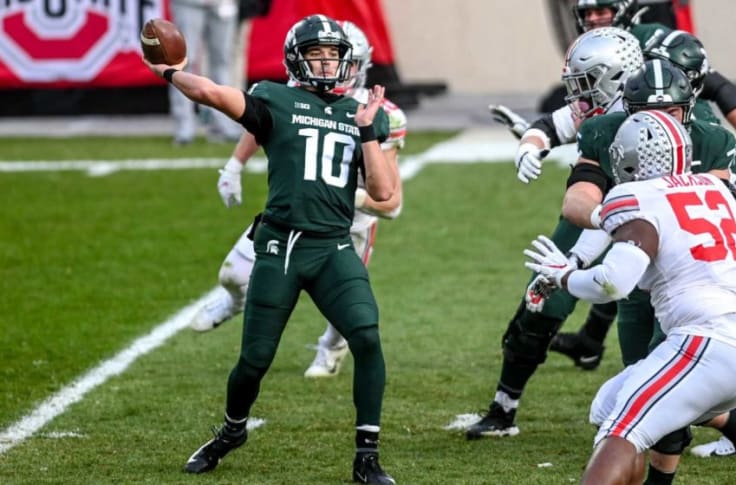 Don’t let the title fool you — I’m not naïve to full-heartedly believe Michigan State will march into the shoe and take down a much superior Ohio State team. But while many refuse to accept it, there’s a way it can happen.

Yes, the key to MSU’s offense is its rushing game with the best player in the nation, Kenneth Walker III, at the forefront. But in order for the Spartans to even have a lick of chance on Saturday, it needs to expose what is perhaps OSU’s most apparent weakness: its passing defense.

The Buckeyes rank second to last in the Big Ten in passing yards allowed per game (261.5) — yet miles ahead of MSU in the category, though (329.0).

There’s no telling what the availability of Spartan receiver Jalen Nailor will be on Saturday, but one the greatest strengths of this MSU offense is its depth. With WR1 Jayden Reed leading the Spartan receivers with 82.90 receiving yards per game and key assets like Tre Mosley and Montorie Foster stepping up at significant moments throughout the season, quarterback Payton Thorne has multiple options to throw to on Saturday.

Speaking of Thorne, the redshirt sophomore QB has been as reliable as ever these past couple weeks, throwing for over 270 yards against Purdue and Maryland. In last week’s win over the Terrapins, he also threw for four touchdowns, a mark he has now met three times this season. It’s safe to say he’s having success in the air at just the right time.

There’s no questioning that the most evident factor that should dictate this game is the OSU passing offense. With MSU ranked dead last in the country in passing yards allowed per game and Ohio State standing at sixth in the nation in passing offense and first in the Big Ten, all the signs point to a disastrous defensive outing for the Spartans.

If the MSU secondary surprises the country and comes out with its best performance of the season, it would be huge for the Spartans’ chances. But that’s not likely to happen. In the almost inevitable event that it doesn’t, it will be the job of the men up front that dictates the overall effectiveness of the Spartan defense on Saturday.

MSU has one of the best QB-pressure squads on its defensive line in all of college football. Players like Jacub Panasiuk, Drew Beesley, and Simeon Barrow have pulled the weight of the Spartan defense, making life difficult for mobile quarterbacks.

This game starts with them. Pressure needs to be applied to OSU QB C.J. Stroud in order for MSU’s defense to have any success in Saturday’s matchup.

It doesn’t get more exciting than this. College Gameday. A top-10 battle between two of the top teams in the Big Ten East. It’s November football, and everything is on the line for these two 9-1 teams that hope to earn their respective spots in this season’s College Football Playoffs.