WHY NO. 8 MICHIGAN STATE WILL BEAT NO. 6 MICHIGAN 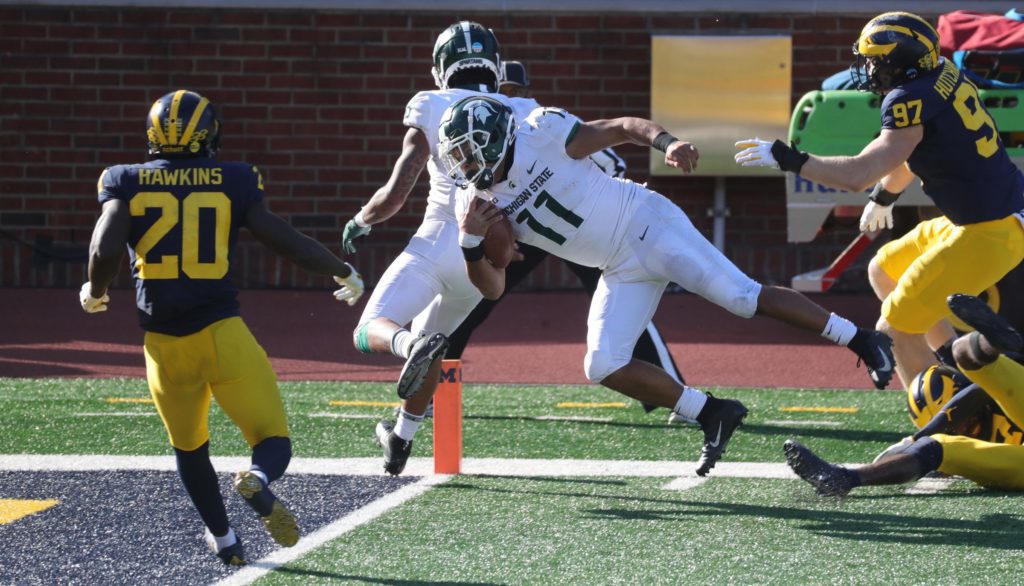 When Michigan State has beaten Michigan in recent years, it hasn’t exactly held much significance in the grand scheme of things.

But that would be far from the case in this year’s matchup if the No. 8 Spartans are to knock off No. 6 Michigan in East Lansing on Saturday. Each team enters the contest with an undefeated record, the first time such an event has happened in over 10 years.

Both MSU and Michigan are now fighting for much more than they were expected to bargain for before the season began. At the moment, each program has the same goal in mind: to win the Big Ten East. Saturday’s game could very well dictate each team’s chance of making that objective a reality.

Here are three reasons why MSU will conquer the Wolverines on Saturday:

Michigan relies too heavily on the run

Nobody would doubt Michigan has one of the top running games in the nation. The Wolverines dominate on the ground week after week and have marched to a No. 5 rushing offense with 253.3 rushing yards per game.

While the ground has proven to be a big factor in Michigan’s success, the Wolverines are much too reliant on it, as they stand outside the top 50 in passing offense.

The Spartans have a solid group up front on the defensive end with Jeff Pietrowski, Jacob Slade, Simeon Barrow and Jacub Panasiuk, who leads the nation in most quarterback pressures this season, according to PFF. If this group can stop the run while also putting pressure on Michigan QB Cade McNamara, there could be very limited options for the Wolverine offense on Saturday.

That’s been the name of the game for the Spartans these past few weeks. MSU has had a number of close games where it was tasked with climbing out of holes it had dug itself in.

In Week 4 against Nebraska, the Spartans found themselves down a touchdown with just over six minutes left in the fourth quarter. It was a Jayden Reed 62-yard punt return TD and an overtime interception by Chester Kimbrough that ultimately solidified the outcome of a victory MSU should not have won based on its performance.

Most recently against Indiana in Week 7, the Spartans shot themselves in the foot with 12 offensive penalties. They never even crossed over into enemy territory in the whole first half.

It’s the stubbornness of the defense that won these tight games, but it also could very much be attributed to MSU’s ability to convert on big offensive plays at just the right moment. Such plays tend to be credited to Reed or Jalen Nailor, who both can make exceptional catches when they’re needed the most.

Though Michigan has a top-25 rushing defense, I would still take my chances on the ground any day of the week if my top weapon was the best running back in the nation. Kenneth Walker has had a remarkable season thus far, and when the Spartan O-line can open even a decently sized hole, there’s no telling how large of a gain Walker can break for.

The greatest strength of this MSU team is the number of weapons it has at its disposal. Even if it’s a down day for Walker, there’s plenty of other options that MSU can throw at you. But considering the impact this game would have on Walker’s case for the Heisman Trophy award, I would guarantee he’ll look to have a big day in the biggest sporting event of the weekend.

PrevPreviousWHY NO. 6 MICHIGAN WILL BEAT NO. 8 MICHIGAN STATE
NextIS THIS THE YEAR MSU FOOTBALL WINS B10 AND NATIONAL CHAMPIONSHIP?Next