Anyone who follows sports in the state of Michigan understands that Detroit Lions quarterback Matthew Stafford is a polarizing figure.

I think he is a top 10 player at his position and I have always appreciated his skill set. 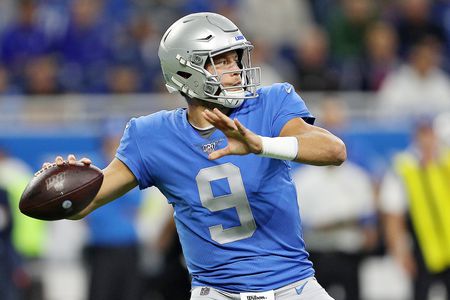 I read an article in “The Athletic” recently that mapped out teams that had games started by Pro Bowlers on offense, other than the QB, from 2016-2019. It showed just how much support quarterbacks had on every team in the league. The player(s) had to be a Pro Bowl starter, but the article did acknowledge “non-qualifiers,” or players who were named as replacements.

The Lions are one of four teams with NO Pro Bowl starters and just TWO non-qualifiers (Kenny Golladay and TJ Lang-both represented the NFC because a voted starter was injured).

Since Lomas Brown left the Lions in 1995 and Kevin Glover fled in 1997, this franchise has not had a Pro Bowl offensive lineman. Think about that for a moment. The team has drafted 29 during that stretch, from Juan Roque and Tony Ramirez in 1997 to Jonah Jackson and Logan Stenberg in 2020 and had NONE.

Sure Larry Warford was a three-time pro bowler, but that was with New Orleans, not with the Lions who drafted him in the third round in 2013. Sure Manny Ramirez helped the Broncos win Super Bowl 50, but Denver got him from Detroit after the Lions selected him in the fourth round in 2007. Yes Laken Tomlinson was drafted by the Lions in the first round in 2015, but his success came as a starter for the NFC champion Niners after the Lions gave up on him following two years.

LIONS NOT IN THE RUNNING

The Lions have drafted 10 running backs since 2009-from Aaron Brown in the sixth round in 2009 to D’Andre Swift and Jason Huntley in 2020. Four of those men have rushed for 100 yards or more in a game. In Stafford’s 149 career games under center, the Lions have had only 10 games in which a running back reached the century mark on the ground. Stafford is 8-2 during those games (the losses were to Tennessee in 2012 in OT and to Kansas City where Stafford threw for 290 yards and 3 touchdowns in 2019).

Remember when Kerryon Johnson rushed for 101 yards on 16 carries in 2018? We celebrated like it was Christmas because it ended a 70-game drought in which the Lions failed to have a 100-yard rusher. There were 112 100-yard rushers elsewhere in the NFL in that same stretch (Reggie Bush on Thanksgiving in 2013 to Johnson’s on September 23, 2018).

It’s not that Stafford shouldn’t be able to overcome some of his teams shortcomings. He should…and he does. He’s dealt with three head coaches and four offensive coordinators in 11 years. The success has been limited, but the drafting and developing (or lack thereof) of offensive lineman and running backs is what has held this franchise back. NOT the quarterback.