MSU CONQUERS NORTHWESTERN IN ITS FIRST GAME OF THE SEASON 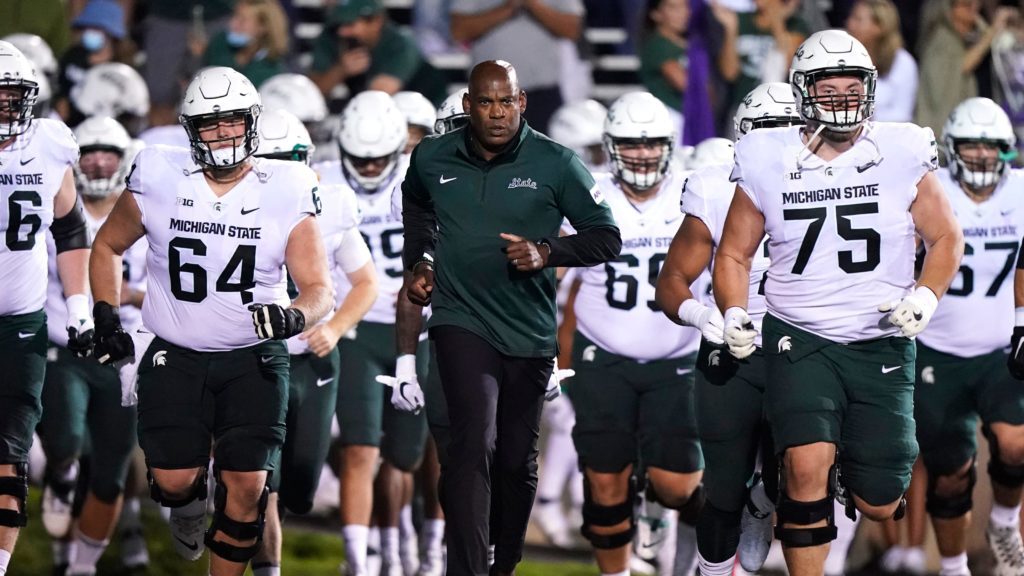 Michigan State football coach Mel Tucker started his second year at the helm off with a strong 38-21 Big Ten victory. MSU marched onto Ryan Field in its season opener against Northwestern on Friday night and showed no intention of leaving with anything other than a win.

The story of the game was Kenneth Walker III, the highly anticipated junior transfer from Wake Forest. Walker rushed for 264 yards and scored four touchdowns in his premiere game as a Spartan. It had been over 10 years since a MSU player had four rushing touchdowns in a game, when running back Edwin Baker did so back in 2010.

Walker’s first touchdown of the night came on the Spartans’ very first snap of the game. The running back took it to the house on a 75-yard run, putting MSU on top just 13 seconds into the contest.

It wasn’t long before Walker did so again, as he found the end zone on a 3-yard rush just over seven minutes later. The Spartans led NU at the end of the first quarter with a 14-0 advantage.

Spartan quarterback Payton Thorne would then make his first and only touchdown pass of the night, finding backup running back Jordon Simmons for a 14-yard reception. It was Simmons’ first touchdown of his career.

MSU had a 21-0 lead with a minute to go in the first half, but it was the Wildcats’ tight end Trey Pugh who quieted the well-traveled Spartan crowd with a 1-yard touchdown catch from NU QB Hunter Johnson.

Johnson threw for 283 yards and three touchdowns for the night.

The Wildcats continued firing to start the second half, as NU’s Evan Hull bursted for a 49-yard run on the team’s first play. NU couldn’t capitalize on the drive, though, as kicker Charlie Kuhbander would eventually miss a 38-yard field goal that would have given the Wildcats’ some significant momentum.

On the next MSU drive, Thorne completed passes to wide receivers Tre Mosley, Jayden Reed and Jalen Nailor, all for at least 10-yard receptions.

The drive ended with a 5-yard touchdown from who else but Walker.

The scoring from both teams was stalled for the rest of the quarter.

NU got back on the board in the fourth quarter, though, when Pugh scored his second touchdown of the evening for the Wildcats. MSU led 28-14 with 11:17 to go in the game.

Spartan kicker Matt Coghlin then extended the gap after a successful 37-yard field goal attempt. But the Wildcats still refused to back down, as NU scored once again on a possession gained from an MSU turnover by running back Harold Joiner.

But of course, Walker returned to the field and put a stop to the Wildcats’ momentum. He ended his memorable night with one last touchdown, a 6-yard run that followed a 30-yard gain on his previous carry.

MSU returns to East Lansing on Saturday at noon for its home opener at Spartan Stadium. The Spartans will face off against Youngstown State in an attempt to extend their season start to 2-0.